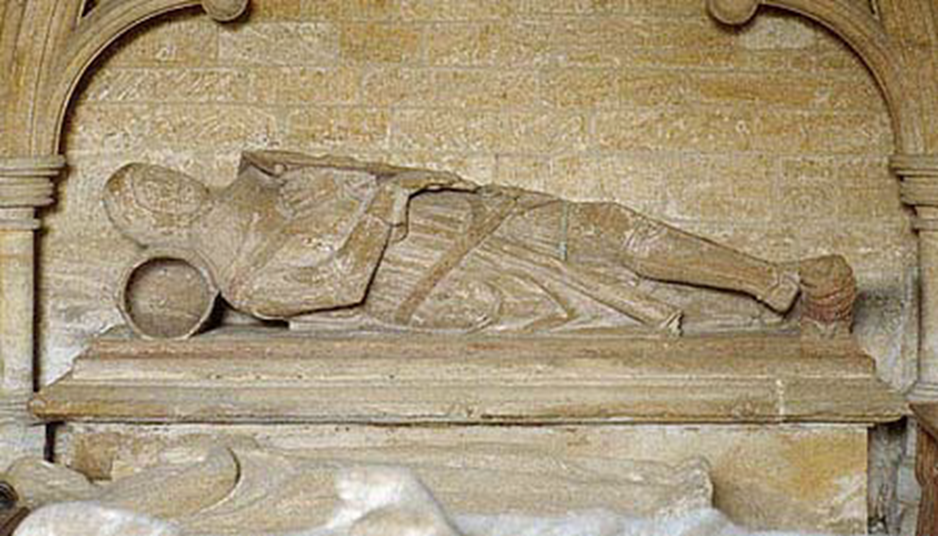 St Mary’s church in Limington in South Somerset is a grade I listed building. It is known that the present building dates from the late 14th century but includes fragments of an earlier building; notably the north door and footings of the Nave and tower date from the Norman period. The South porch is believed to date from the 13th century and the Nave and tower from the following 14th century. The north chantry chapel, after whose dedication the church today is named, has been dated to 1328. Within the chantry chapel there are four ancient effigies dating to the 14th century. The most striking is that of Sir Richard Gyvernay who endowed the chapel. Stylistically the knight’s armour can be dated to the second decade of the fourteenth century and is generally considered to be the most detailed example of this date in existance.

He lies on his right side with his face turned upwards. This is unusual but has been seen occasionally in the first half of the 14th century. There are similar effigies carved in Ham stone at Pendomer and Chilthorne Domer. There is evidence of a tradition of carving figures resting on their sides in the south west. The Limington knight wears an early version of a bascinet (helmet), not secured to the mail coif (cap), but kept in place by a strap under the chin which is attached to the bascinet by quatrefoil mounts. He also wears considerable protection on his arms with two pieces covering the upper arm, a single vambrace (forearm protectors) protecting the forearm and small couters (at the elbows). His hands are encased in flamboyant gauntlets. Despite his twisted attitude the shield is carried conventionally on the left arm. Unusually, the hands are not joined in prayer. Instead the left hand grips the guige (a leather strap for hanging the shield on the shoulder or neck) and the right rests on a sword pommel. The gown divides over the thigh revealing the hauberk (chainmail shirt) beneath the gambeson (padded jacket) below that. The poleyns (knee protectors) are very fine. They have squared corners with cinquefoil mountings for the securing straps. They have an elaborate cross carved in relief. Below the knees greaves (shin armour) are worn, and sabatons (foot armour) cover the feet. The knight’s head rests on a large helm carved in great detail. There is a very rudimentary visor, probably hinged at the top with a decorative strip down the front. The remnants of a crest can be seen on the top of the helm. With its polychrome intact, some of which is still visible, this figure must have been quite spectacular.

For more on the unexpected history of weapons, click the link!

For an unexpected look at the history of fabric, click here!