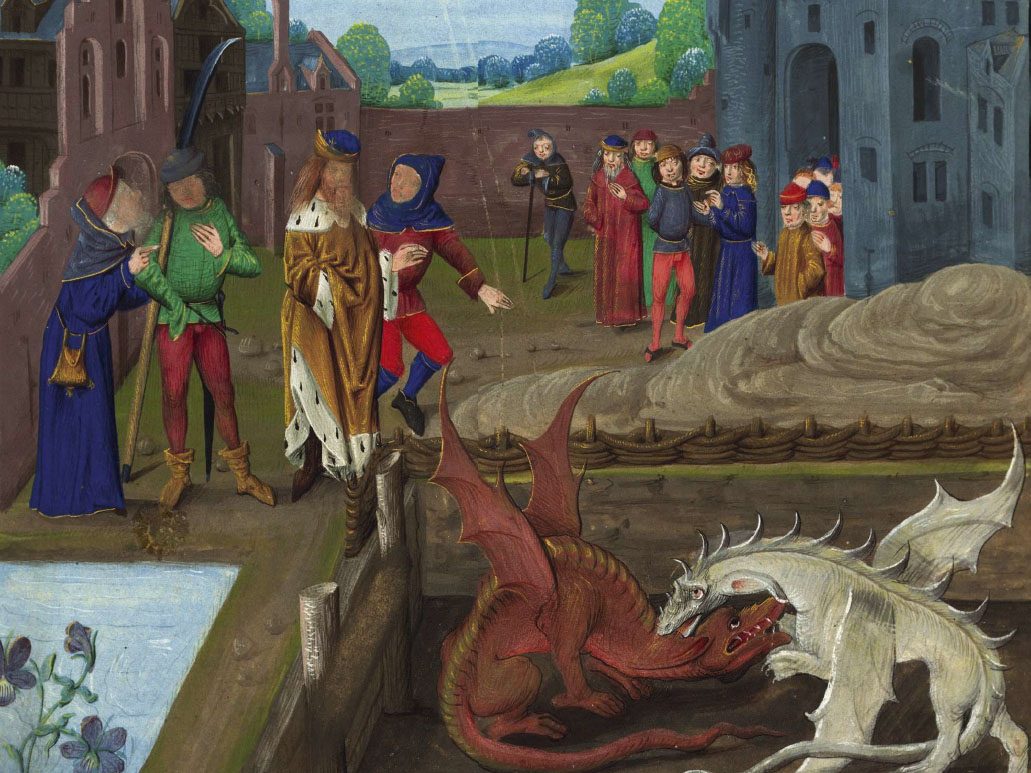 A quick examination of modern popular culture shows the frequency of dragons in works of fantasy – for example, appearing as a central idea in both J. R. R. Tolkien’s ‘Lord of the Rings’ and George R. R. Martin’s ‘A Song of Ice and Fire’ series, which have attracted millions of followers worldwide and have also been the launching point of massively popular media franchises. The concept of dragons is not just a theme in fantasy or literature, but also as figures of national patriotism – the flag of Wales depicts a fearsome red dragon, which has essentially become a symbol of the country, appearing on other emblems of Welsh identity such as the badge of the national football team. The history of dragons is an amalgamation of both of these ideas of myth and patriotism, dating back over a millennium ago, to the year 829.

The History of the Britons

The ‘Historia Brittonum’, or ‘The History of the Britons’ is a supposed history of the settlement of Britain by natives of the city of Troy. Written in Welsh, the text has survived the ages through a number of revised editions, which date from the 11th century. Although authorship is commonly attributed to Welsh monk Nennius, this is difficult to confirm and is the cause of much debate between scholars. Attribution to Nennius comes as the result of a preface to the text which was written in his name, where it is possible that this was a secondary addition, falsifying the idea of Nennius as author, in favour of the belief that the compendium was penned by a number of anonymous authors. The text is problematic as a source of history because of its tendency to combine elements of legend and fact, whilst at the same time combining a number of events into singular incident.

King Arthur and the Battle of the Dragons

The work itself is the spawn of much British fable, being the first source to ever mention the legend of King Arthur, and is also the first known source to use a dragon as a representation of Wales. The relating passage describes a battle between two serpents deep underground, which was later adapted into a prophecy by the wizard Merlin, in which a white dragon, a representation of the Saxons, and a red dragon, a representation of the Britons would engage in a fierce battle. Although initially dominating, the white dragon would eventually lose the battle, having to surrender the land which is now the country of England, allowing the Britons (the red dragon) to recapture it. This is believed to be a depiction of conflicts in the 5th and 6th centuries between the Britons and the invading Saxon force.

Finding its roots in deep historical mythology, the symbol of the dragon as a representation of Welsh nationalism is of course still rampant today, a symbol that has truly lasted the test of time, lasting from the days of potential author Nennius. Although accounts of wizards and dragons playing a true role in history are in the modern day scoffed at, the lasting legacy that such tales leave behind is an all but unexpected fact.

To find out more about the history of dragons, listen to our podcast!