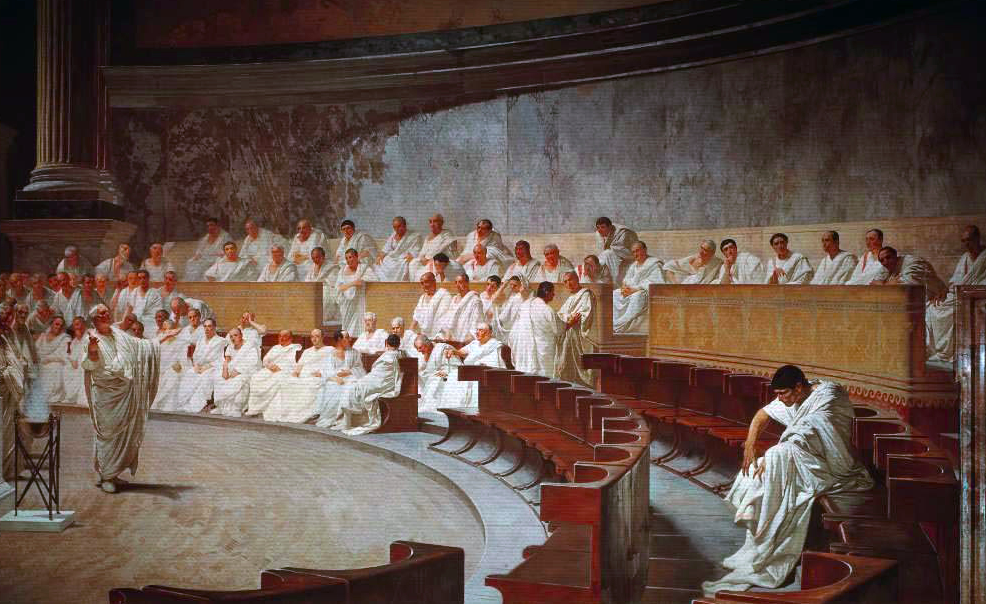 A fine writer and orator

Born in 106 BCE into a wealthy family of the equestrian order, Marcus Tullius Cicero was a Roman lawyer, philosopher and orator and one of the most eminent men of pre-Imperial Rome. He is now considered as one of the finest orators and prose stylists whose influences on writing and the Latin language have lasted until the modern day. He gained instant fame in 80 BCE after his first legal success defending Sextus Roscius on the charge of patricide, a case in which he indirectly challenged the dictator Sulla. After this case, he spent 3 years in Athens, where he studied philosophy and rhetoric; many point to this time as when he developed his oratory style. Upon his return, Cicero started his political life in Rome, whist continuing his role as a lawyer; he won another famous case prosecuting the governor of Sicily, Gaius Verres, the case which signals the point at which Cicero becomes Rome’s top lawyer. Cicero would later go on to become a consul of Rome in 63 BCE, the same year in which he uncovered the plot of Catiline, an action which became deserving of the title “father of the nation”. Cicero’s success as a lawyer lead him gaining some personal enemies, one of these was Publius Clodius Pulcher, who he had helped prosecute in 62 BCE. Therefore, when Clodius was elected Tribune of the Plebs, he passed a law in effect exiling Cicero. This exile lasted 18 months before Cicero returned at the will of Pompey, leading to Cicero’s backing of Pompey in the civil war against Caesar. When Pompey was defeated, Cicero once again went into exile; he returned when he was pardoned by Caesar in 47 BCE. Caesar was then assassinated, and Cicero tasked himself with destroying the reputation of one of Caesar’s remaining followers, Mark Antony. In a series of speeches known as The Philippics, Cicero accuses Antony of using Caesar’s assassination to gain wealth and plans and abuse his position as consul. These speeches are now viewed as some of his most powerfully written. This, of course, meant Cicero gained Antony as another personal enemy, and so in 43 BCE, Cicero was executed by Antony as part of the second triumvirate. It is said that his hands, which had written the Philippics, along with his head, which had spoken them, were displayed in the Roman Forum.

Perhaps a less known document of Cicero’s relates to the question of how a Roman man should walk when in public. In a letter to his son, he warns him to neither “employ effeminate lingering in our gait” nor “pick up excessive speed”. This gives us an insight into the Roman views on how different members of society should appear; whilst walking slowly is associated with effeminacy, slaves are represented as hurrying everywhere hastily. Cicero’s son however, as an aristocratic man, should walk in a consistently controlled and measured way in which he doesn’t draw unnecessary attention to himself. We know from other sources that effeminate walking was frowned upon by Roman men who often saw it as overtly homoerotic. This is all an excellent example of Romans connecting the character of a person to their appearance.

To learn more about walking, and many other aspects of Roman society, why not grab yourself a copy of our book Histories of the Unexpected: The Romans!

And you can listen to even more about the unexpected histories of the Romans in our podcast!