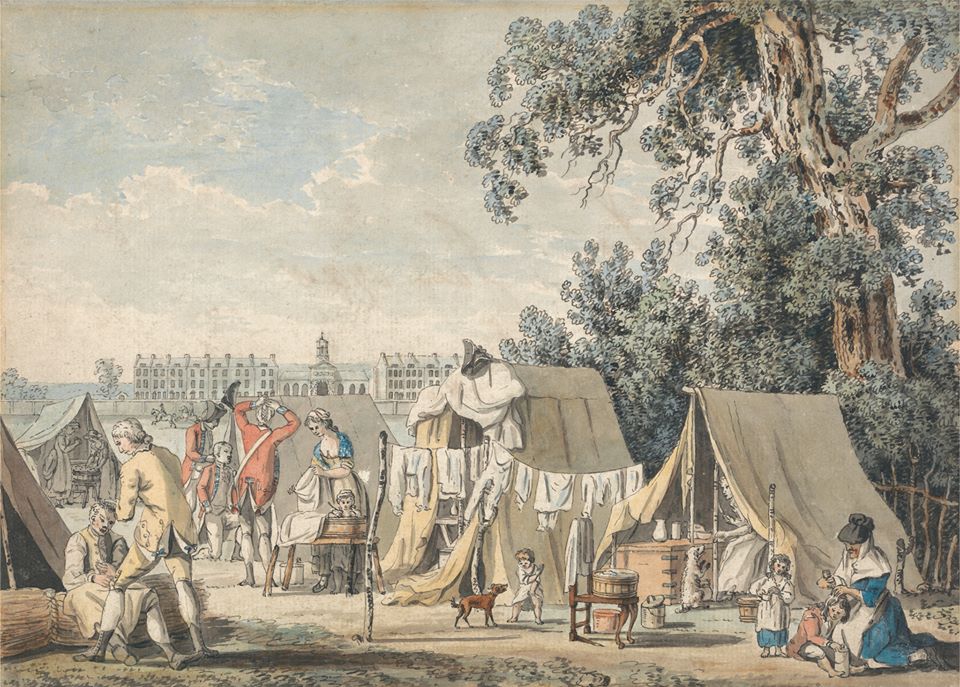 We are all followers of something: whether it be a football club or celebrity, we follow their lives, even their social media accounts. But being a follower predates Twitter and is something that is closely associated with war. Military orders but also the army itself would be followed.

Camp followers were groups of civilians who followed armies and they were either wives and children of soldiers or informal army service providers who sold services, like cooking, to the army. The female relatives of the soldiers often provided the services of cooking, laundering and sewing. Up until the mid-nineteenth century European and American armies relied heavily upon the domestic services of camp followers as they relieved pressure off of the army. Camp followers of the American Revolutionary War and Civil War highlight the role of women during war. Many women wanted to contribute to a war that their men-folk were risking their lives for so they abandoned their homes and took on the domestic chores for the army, receiving a ration of food or wages in return. Although a seemingly small contribution in a war, the supply of warm meals and mended uniforms helped to boost the morale of the soldiers. The motives for following armies were either to remain close to loved ones or to earn money, but either way these followers improved the lives of soldiers.

Fought by Britain and the Ottoman Empire against Russia, the Crimean War (1853-1856), saw the emergence of new types of camp followers. In 1854 William Howard Russell, working as a journalist for The Times newspaper, became the first war correspondent. He spent 22 months following the British army, reporting on what he saw. His reports were vivid and realistic, especially those concerning the harsh conditions that the soldiers were living in and was critical of the army for its lack of organisation. It was Russell’s report on the Charge of the Light Brigade that inspired the poem by Lord Tennyson. Russell’s motive was simply that he wished to bring news of the war to Britain yet he was criticised for being inappropriately explicit in some of his reports by Queen Victoria.

In 1855 photographer Roger Fenton also followed the British army as the first war photographer after being commissioned by the Prince of Wales to help counteract the negative publicity in The Times. Although arriving after the major battles his photos still captured the lives of soldiers and the war-torn battlefields. Fenton’s photographs were used as propaganda, especially his most famous photograph, ‘Valley of the Shadow of Death’. Two versions of this photo exist, one with a few cannon balls strewn across a road and the other with cannon balls covering the entire road which suggest that cannon balls had been added to imply the British had been under significantly heavy fire. It is unclear whether Fenton’s photographs altered public opinion, but people did pay to see his exhibition revealing there was interest the photos he took.

The follower has evolved over many years and even the followers of armies have adapted over time. New technologies and social circumstances have led people to their loved ones or in search of news shaping how we understand the role of women and how wars were reported.

To hear more about the history of the follower, listen to our podcast!